On a completely different, unrelated-to-Sudan note, I want to take a quick moment to remember my great-grandmother, Anne Krum, who died late Tuesday afternoon, aged 105.

Born in 1904, Nonna (as everyone seemed to know her) lived a life that can only be described as remarkable. Immigrating from Poland in the early 1920s, she passed through Ellis Island and eventually settled in Pittsburgh, Pennsylvania. Graduating high school in just two years, she raised three daughters singlehandedly following the death of her husband. One of them, my grandmother, subsequently cared for her throughout the past several years.

In times when it would be generously described as rare, and less generously as bizarre or a bad decision, she worked full-time, a single mother taking care of children. Years later, she went into real-estate, becoming highly successful, and dividing her time between homes in Miami Beach and Pittsburgh.

As she entered her 90s, it became clear that she needed to be closer to family for health reasons, and she relocated to Florida permanently, first Miami, and later Sarasota, where my father and grandmother live.

It was only after she retired that she became a serious painter. She'd been interested in the early 1950s, but responsibilities and life had gotten in the way. Over the past several years, she produced hundreds of paintings, ranging from large canvasses to hand-painted cards with wildflowers, with phrases written on the inside like "Happy Birthday, Nathaniel. Happy Every Day." Last year she produced a one-person show displayed in Sarasota's main library, and although any sort of travel outside the house was difficult at that point, she received a critical reception from friends and family.

The past few times I've been in Florida have been for big family events like birthdays, bar/bat mitzvahs or holidays. Each time, Nonna would basically hold court in the living room of my grandmother's house, sitting in a comfortable chair while all of us- almost 15 great-grandchildren, a dozen grandchildren (the same people I know as late-40s and mid-50s parents, uncles and aunts) would come sit with her, talk, and get advice. Incredibly intelligent, she had a great way of cutting through the crap, dispensing blunt advice (politely though, at the same time), and always making it clear that despite her physical frailty, an incredibly sharp mind was still there. Seeing my young teenage sisters and cousins sitting and talking with her was always amazing to see, as they seemed to get taller even as she became noticeably smaller.

As a risk-taker, and someone prepared to embrace things that some people might think odd for someone of a certain age or gender, I can't say I was all that surprised when I opened me email one morning a few months ago, to find a message. The subject line: "Anne Krum Added You As a Friend On Facebook."

Nonna, at age 104, joined Facebook. How great is that? Shortly afterwards, a group was formed in her honor, "Fans of Anne Krum, Oldest Person on Facebook." When I checked this morning, there were almost 300 members, from across the world.

As I write this, it's sad, but at the same time, I can't say it comes as a surprise. After going strong for so, so long, she began to decline quickly over the past few months. Yesterday evening, she moved on- we can only hope it was somewhere better. 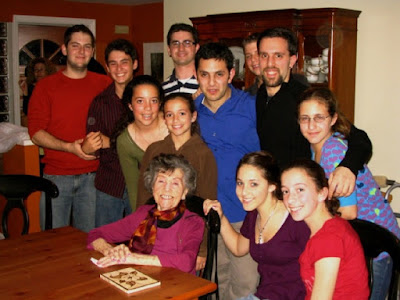 With her great-grandchildren, January 2008
Posted by Nathaniel at 7:52 AM