We now return to our regularly scheduled emergency...

“Nah-than-iel, I wanted to talk with you about something.” Christophe, the Country Representative and my boss in Yaoundé is calling me, his English spoken with a strong Francophone Belgian accent.

…And just like that, my time in Cameroon ends and the next chapter begins.

“I was in touch with the regional office, and they wanted to discuss a position in Congo with you,” Christophe continues. “Would you potentially be interested?”

I pause a minute before I say anything, many considerations flashing through my mind. Congo. This is a place that’s been synonymous for decades with war, corruption, dictatorship, dysfunctional infrastructure, and everything else that gives Africa a bad reputation. Truly the ‘Heart of Darkness,’ as it was famously called by Joseph Conrad. Working in Congo would mean saying goodbye to much of the comfort and stability that have come with living in Cameroon, a developing, but largely together place, at least in the cities. It’d mean heading back into the maw of emergency work, having already experienced similar situations in Chad, northern Uganda and southern Sudan- my days of DSL at home, spring rolls at the Vietnamese restaurant, and cruising down the national highways at 110 km/hour would be over, replaced by emergency needs assessments, UN helicopter flights, and awful stories of flight from disaster and other miseries. Do I really want to give up the relatively comfortable life of working in ‘development’ for its rougher, harsher, and more intense cousin, ‘emergency?’ That’s exactly what this would mean. So, on one hand it’d mean saying goodbye to a fairly comfortable life- on the other, it’d be a huge opportunity; my salary would more than double, and I could have the distinction of putting Chad, Sudan, and DRC on my CV, the true humanitarian disaster trifecta.

“Yes, I’d definitely consider it,” I tell Christophe. “What would I need to do?” 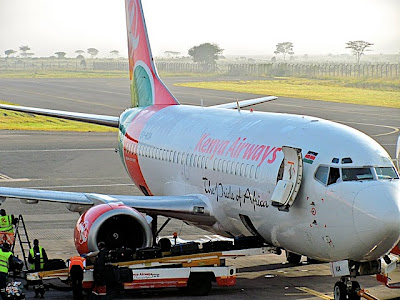 One 10-minute ‘interview’ (more of a casual chat) with the Country Representative in Kinshasa, and a brief conversation with the head of the sub-office, and it’s done- I’m leaving Cameroon, next stop Goma, eastern Democratic Republic of Congo (DRC), where I’ll be managing emergency Water/Sanitation and Education operations for CRS. Less than two weeks later I step off the jetway at Yaoundé/Nsimalen Airport onto a waiting Kenya Airways 737, next stops Douala, Nairobi, Bujumbura, Kigali, and Goma. Landing at the small terminal in Kigali, it’s immediately obvious what they say about Rwanda, that it’s a country going places. Following the horror of the 1994 genocide, people have said that the country turned a corner, and is on the way to becoming a well-developed and organized place where things work, in other words, not your typical African nation. The current president, Paul Kagame, has been called the ‘Napoleon of Africa,’ and seems determined to drag his country out of the morass of corruption and poverty that seems to hinder everything in this part of the world. Many people have said that Kagame has overseen this development at the price of true democracy, however, so it’s not as if everything is perfect. Perhaps an analog might be the government of Singapore, which turned a backwater into a global hub, but did it at the expense of civil liberties. Under the surface many of the of the old wounds and tribal hatreds undoubtedly endure, but it’s difficult to see much evidence of this on my brief drive through Kigali’s impeccably clean and manicured streets, with tall buildings and activity everywhere.

“Voici Gisenyi et Goma,” our driver says, referring to the Rwandan border town first. Here are Gisenyi and Goma, the place I’ll call home.The city quickly gives way to the countryside as we climb up steep green mountainsides offering incredible vistas of the landscape below. The highway (and it can legitimately be called as such) is well-paved, striped, and has large white pillars marking every kilometer. It’s a three-hour drive from Kigali to the eastern border Rwanda shares with its enormous neighbor DRC, perhaps 25 times its size, or greater. Goma sits directly on the border, making Kigali far more accessible than the Congolese capital Kinshasa, more than 1,500 impenetrable jungle-filled kilometers to the southwest. Driving through the mountains of Rwanda, we suddenly reach a point where we’re overlooking a body of water that looks as big as one of the Great Lakes in the US, ringed with green mountains and the glint of many thousands of tin roofs in the late-afternoon sunlight.

The border crossing is surprisingly easy, and once we cross, the change is immediate. The well-paved road disappears, replaced by cracked and potholed tarmac; the buildings look less well-constructed, and everything has a more run-down feel to it. 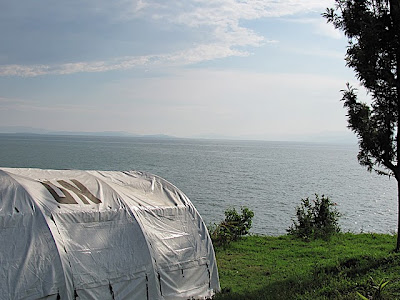 Like Gisenyi, Goma sits on the shore of Lake Kivu- back in the days when this place was the Belgian Congo, Goma used to be something of a resort town. The weather is consistently pleasant, the views are stunning, and the black volcanic soil coming from Mount Nyiragongo, 12 km to the north, enables farmers to grow every type of fruit and vegetable imaginable. Unfortunately Goma has become has become known for other things over the years, none of them good. In 1994, at the height of the Rwandan genocide, waves of Hutu and Tutsi refugees poured across the border into Goma and hastily-arranged refugee camps on the shores of the lake. In the midst of a natural paradise, conditions quickly became hellishly grim, and a cholera outbreak only added to the misery. Cholera is an incredibly contagious disease, and by the time the epidemic had burned itself out a few weeks later, thousands were dead. To make things worth, North Kivu province, of which Goma is the capital became the scene of some of the worst of the fighting during the DRC’s multiple civil wars in the 1990s. As if to ensure that this place could never get a break, that it was cursed despite the idyllic setting, Mt. Nyiragongo erupted in 2002 and sent an inferno of lava cascading through town, largely obliterating the central business district. The last kilometer of the airport runway was buried in lava, and to this day cars crawl along the dried lava flow, leading to streets that are made entirely of large rocks. Driving anywhere in town, with the exception of the handful of recently paved roads feels like going on one of the test courses you see at Land Rover dealerships in the US or Europe, only real, and for kilometers at a stretch.

As the scene of so much misery, human-caused and otherwise, Goma has become a humanitarian and NGO hub, and any international nonprofit worth it’s 501c3 status has a presence of some sort here, and as such, this place is something of a boomtown. In addition to the NGOs, MONUC, the UN peacekeeping mission Congo (and largest of its kind in history) has set up a major operations base here, and the massive salaries the UN fonctionnaires bring with them (as well as the comfortable salaries of NGO workers) have sent prices skyrocketing for everyday items. Imported goods are expensive wherever you go, but a box of Corn Flakes doesn’t generally cost $12 except in NGO-stan, places like Goma, Juba, and N’Djamena. Expatriates in the developing world, with the exception of Peace Corps volunteers and missionaries (although even them to an extent) always live something of a life apart from the communities in which they live, but in Goma the divide feels especially dramatic. Foreigners (myself included) live in enormous villas with tile floors, spacious rooms, comfortable furniture, generators to cover for the regular power outages, all surrounded by massive walls and razor wire. Contrast this with the house of the average Congolese family in Goma, which in many cases wouldn’t be fit for animals in the developed world. At Shopper’s Market, the store where all the UN and NGO staff seem to shop, 200 grams of imported foie gras costs $49, but the vast majority of people in town struggle to earn more than a dollar or two a day. I don’t know if there’s any way to avoid this disparity; it seems simply to be fact of life in this part of the world, and in this career. 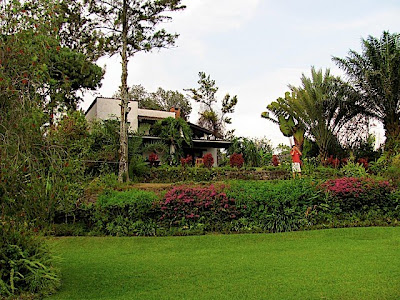 It can be hard to think of Goma as a ‘hardship post,’ a place where I’m receiving ‘danger pay.’ I think of this the other night when I go a party hosted by someone working for UNICEF. The house sits on the shore of Lake Kivu, surrounded by a stone dock and manicured garden of rolling lawns and tropical flowers. The weather is cool and pleasant, and the slight breeze makes the moonlight ripple on the shore of the lake. I chat with other expats like myself, drinking Absolut and snacking on crackers and imported French cheese. Someone’s iPod blares a mix of upbeat party tunes, and more English is being spoken than anything else. Looking across the lake it’s easy to forget that in a setting as perfect as this thousands have died needlessly and will continue to die from pointless war and easily preventable disease. That’s the paradox of Goma and other places like it, I guess- relative luxury in the midst of suffering. Yes, my life isn’t as comfortable as what I had in Cameroon, but it’s pretty damned nice- one look around is all I need to figure that out. It’s not that this sort of inequality should be the acceptable status quo, but for the moment this is how things are, and it’s time to adapt. This is where I’ll be living, and I may as well find a way to work within it; now entering bizarro-world, population plus-one.