Message From An Old Friend

I've been trying for the past couple months, but I was finally able to get through to Marc, my friend and 'host father' while I was with the Peace Corps in Chad. He was my next door neighbor and close friend for the almost 21 months I lived in Gounou-Gaya, a small town in the southwestern portion of the country, not far from the Cameroonian border.

I've wanted to speak with him for awhile now, to tell him about my new job in Cameroon, and how I'm hoping to come back to Chad at some point to visit him, if I can. We haven't spoken since last summer, something I feel really guilty about- I keep meaning to, but something gets in the way, or I'm suddenly off in a place with no phone reception for a month at a time. In any case, the Zain Prepaid gods are cooperating in both Yei and Gounou-Gaya this morning, and my call miraculously goes through. 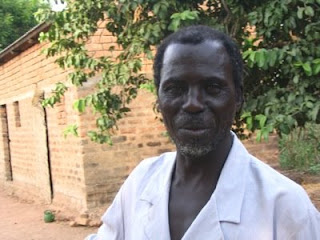 It's great to catch up with Marc, and we exchange the usual greetings, the endless ritual of "ça-va" ing ('How's it going?' in French), cut short for the phone. He says it's great to hear from me. I tell him about the new job in Yaoundé, and he sounds genuinely excited to hear about it. I hear him explaining it to his wife, Valaddi, in Musey, their native language. I've forgotten the little bit I knew, but I manage to hear 'ça-va-Oui, au Soudan," and "Yaoundé.'

"I wanted to call you earlier to tell you," Marc says in French, "but I didn't have your number."

I freeze. I remember each of Marc's daughters well. Tang-Ira, (aka Tanga), the oldest, who was about eight years old when I lived in Gounou-Gaya. I remember helping her get enrolled in the private Catholic primary school in the village, run by a group of nuns. Ka-Idi, two years younger, started school at the same time, with the cutest wide smile, and always wearing a brightly covered headscarf, to look more like her mother. 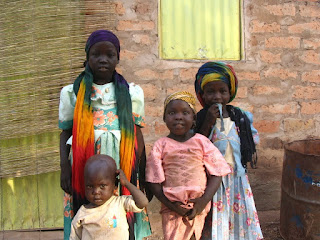 Hophyra, the mischievous four-year-old (at the time) who used to run up to me and clutch my leg- I remember her telling her father one night that she wanted to go to school for the bouille, the milky-peanut porridge that all the little kids got for lunch, and watching Marc laugh uproariously. And Dakassia, just around two-and-a-half when I left; I remember how she would poke her head inside the covered patio of my house, looking for me, saying 'Nyah-ne-nehl,' and waving. I had an American flag pattern hacky-sack I got from the US embassy in N'Djamena that she and I used to play catch with; I'd toss it, and she'd fling it back at me, as hard as a two-year-old could.

"We think it was malaria."

"My condolences, Marc. Thank you for telling me."

We talk a few minutes more, but I feel like I don't really have much else to say. The thought of his daughter dying hangs over me, and doesn't really make me want to continue chatting.

Less than a month ago, in this same space, I wrote about what it'll be like when I go back to Chad to visit, and how much I was looking forward to seeing Marc and all of his children again. Of all his children, I feel like I was the closest with Dakassia, and found myself smiling to imagine the cute little girl she'd be by now, possibly just starting CP1, the first year of school. Instead, she's dead, of a disease that can be prevented so easily. One more casualty that didn't need to happen.

In Chad, one in five children is expected to die by the age of five; it's the brutal reality of life in that corner of the developing world. The World Health Organization says that almost 2,400 people die of Malaria in Africa every day, the majority of them children under the age of five. I've known about these statistics for years, internalized them, and always thought about how tragic they are. Until today though, they'd just been numbers, and I never had a face to put with them. Now, picturing Marc sitting with all the other men at the place mortiere, the traditional gathering in southern Chad after a death, where everyone arrives and sits quietly with the mourners. Nothing needs to be said- the sense of grief is palpable, and shared.

Objectively, it makes sense- Marc had five children, so statistically, it was probably going to happen. That doesn't make it fair, or right though. I wish I'd known sooner, and I wish there was a way I could have done something to help. Crass at it may sound to say this, it's too late for his daughter, but there are still ways to get involved and work to stop the spread of Malaria. I've included a few links to major NGOs and campaigns working to do things like distribute treated bed-nets, and promote education campaigns, key steps in the fight against the disease. 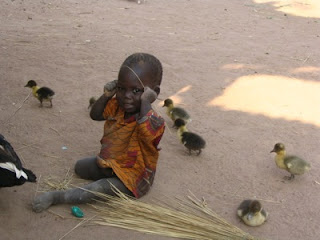 I may be in Sudan, but today, my thoughts are in a small Chadian village. It was great to speak with Marc this morning, but I still wish I hadn't heard such terrible news. I hope I'll have the chance to see him before long, and the rest of his kids- when I do though, someone, a little girl, will be missing.

I'll remember though...
Posted by Nathaniel at 7:20 AM