One of my colleagues is leaving Goma, taking a new job in Bangui (Central African Republic). I’m not sure if I envy her, or feel glad that I’m not going-; it’s a big promotion, but CAR sounds like a tough place, for a variety of reasons. 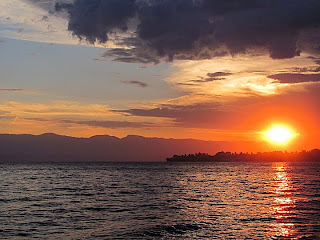 In any case, she can’t leave without a proper send-off, and we host a party at my boss’ house, on the shore of the lake, a lakeside villa with a gazebo and a view that would cost $20 million were it anywhere else, but instead rents for about $2000 per month. It’s hard to imagine more beautiful scenery or better weather, but it comes with trade-off of seeing the degree of inhumanity humans can inflict on each other. Add one of the most active volcanoes in the world on the outskirts of town, a lake filled with billions of cubic meters of poisonous methane and carbon dioxide, and the raw scars of a genocide that killed 800,000-plus people on the opposite shore, and there’s a reason why a popular nickname for this place is ‘hell in paradise.’

All of that aside, the party goes off without a hitch, except for a lack of ice. The electricity is off throughout the city today– no electricity, no ice. After four unsuccessful stops, we give up on trying to find ice, and settle instead for a blowup swimming pool in the gazebo, which we fill with cool water- everyone will have to enjoy their Primus, Mutzig, Sprite and Fanta semi-chilled, the best we can do. Nobody seems to mind though- everyone at the party has either lived in or is from the developing world, and warm beer is normal when electricity is iffy. There are plenty of goat kebabs, large plates of French fries, and cabbage salad- I even spring for a cake at the supermarket, a chocolate creation with ‘FELICITATIONS ET BON VOYAGE’ written in frosting across the top. My colleague has decided that the dress code for her going-away party is African pagne fabric, so the party is packed with blue flowery shirts, printed pictures of various saints on dresses, and a sport coat made from yellow and red Turbo King beer fabric-(slogan: Une Affaire d’Hommes (A Man’s Business). My colleague Jacques takes the prize, however, with a matching shirt and pant combination made of embroidered Primus Beer print-the explosive combination of red, yellow, blue, and dancing women would be enough to wake your average person…in a coma.

Something surprises me at the party though, something I’ve rarely seen in the years I’ve worked in Africa. Typically at parties like this, where both local staff (Congolese, in this case) and expats are invited, there are really two separate parties. The Congolese all hang out off to the side, drinking Fanta and joking in Swahili; the expats are in the other part of the room, drinking beers and mixed drinks, and trying to hear each other over “Tainted Love,” “Get Up, Stand Up,” and whatever the latest hit of the past three weeks happens to be. Some of this can be chalked up to the music, I assume; Bono’s humanitarianism notwithstanding, U2 doesn’t exactly have a huge following around here, and the average mzungu back home isn’t exactly up on the latest in the Papa Wemba or Koffi Olomide catalog.

This time though, the two groups mingle, a great surprise. An Irish guy from Mercy Corps indulges in Travolta-esque Saturday Night Fever antics, while Jonathan, our Congolese-born and Ugandan-educated Monitoring and Evaluation Officer, shakes it in the middle of a circle of dancing Congolese and expats. Jules, our Congolese Non-Food-Item program manager, belts three fingers worth of Bacardi and launches himself into the crowd.

On the edge of the circle, I see Bienvenu, our Logistician, joking in French with my colleague, the guest of honor.

“C’est interdit pour toi de partir. Je ne le permets pas,” he says. ‘You’re not allowed to leave. I won’t permit it.’ My colleague smiles and suggests that Bienvenu comes to Bangui instead.

And on it goes, with Americans, Italians, British, and Congolese having a good time- the beer flows, the music goes on, and my colleague gets quite a goodbye. I’m still struck by the fact that locals and internationals are mingling as much as they are- you really don’t see that frequently.

It’s part of a larger issue, I think. Although both Congolese and foreigners live in Goma, in many ways we live in completely separate worlds. Yes, we drive the same lava-rock strewn roads, breathe the same dust, and battle the same mosquitoes, but for the most part our lives split there. Most Congolese shop at the local markets, buying bread, manioc, fish, beans, and meat- it’s inexpensive, and not far away. Most expats go to Shoppers or Kivu Market, the two big grocery stores in town, where virtually everything is imported- water, milk, and candy come from Kenya and Uganda, but chocolate, cheese, spices, and AquaFresh toothpaste all come from the US, China, France or Belgium, with a price reflecting the 10,000-mile trip. There are Congolese who shop at these places too, of course, but they tend to be the relatively well-off professionals, for whom buying something imported is a stretch, but not impossible. The restaurants I go to with my foreign colleagues are far, far out of reach for the majority of people here, and usually are packed with groups of mzungu- most of the Congolese there are serving drinks and carrying plates. 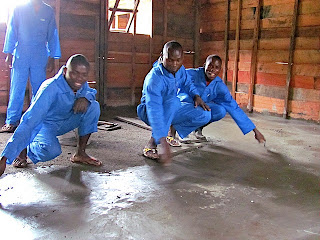 I’m not saying this is fair, and it isn’t particularly nice, but it’s the reality of life in a place like this- the disparity is enormous. We live parallel lives from the people we’re ostensibly here to serve, and it requires a mental gearshift to pay laborers a decent wage of $3 per day, and go to Petit Bruxelles in the evening with friends for a $20 steak. I understand how exploitative that sounds, but it goes back to something I’d written about earlier- living at the same level as the people you’re here to serve isn’t part of the job description. Attempting to do so would be almost entirely pointless- difficult for you, and patronizing for people here.

Living life on a different plane isn’t normal, but I’m not sure if there’s any other way to do this job. NGOs and international organizations aren’t going to be able to retain people if they can’t promise them a decent quality of life– I saw that firsthand in Sudan with a previous position in a different organization. It’s a difficult shift for many of us, having served as Peace Corps volunteers, or something similar, where that’s the explicit purpose of why you’re in a community. That integration, while admirable, isn’t really the goal in the NGO life, at least not directly. Of course it’s a good thing to cultivate local friendships and relationships, but the point of coming to a place like Goma is to do what you can to help, not to become Congolese. If that means living a life apart, despite the consequences, I think that’s the price of admission.

That ticket can be a steep one though, a feeling like I’m constantly missing out. There’s an entire other side of Goma that I never see. I pass it on the street, see it from a distance, or simply have no idea about it. Some things are probably best not to see- this is ‘hell in paradise,’ after all. Other things, I’m sure I’d regret missing- if I knew about them. I started doing this work, at least in part, to see as much as possible. In that, I’ve succeeded, experiencing things I never would have imagined- New Year’s Eve in Yaoundé, playing Hacky-Sack with a Chadian toddler, and a sunset over Masisi Territory and Lake Kivu that would make the most hardened cynic gasp at the utter beauty. I’ve also smelled reeking fish in the Yaoundé Central Market, discovered that the same toddler I played hacky sack with died of Malaria before her third birthday, and know that the waters of Lake Kivu were responsible for one of the single worst Cholera outbreaks in history… Parallel tracks, indeed. 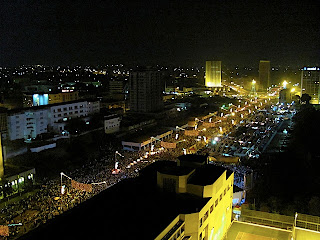 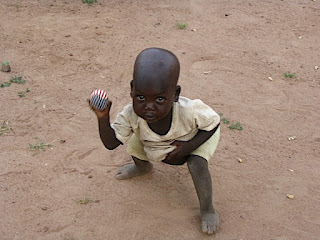 I suppose it comes to this; as I continue to move along I have mental pictures of Chad, Uganda, Niger, Sudan, Cameroon, and Congo. Living a life apart though, what I’m mostly seeing, unfortunately, are the broad outlines.
Posted by Nathaniel at 11:06 AM