Black magic, with a side of sheep 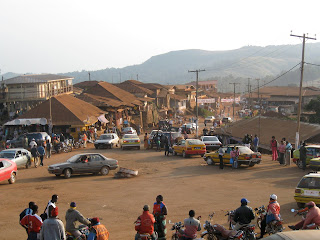 I’m visiting Kumbo, a town high in the mountains (about 1,900 meters up) in the Anglophone northwest of Cameroon, where I’ve come with my colleague Dr. Leslie to assist in a microfinance workshop we’ve helped organize for an ongoing HIV and AIDS project. We’re here on another mission however, and it’s hard to say which is more important. We’re on the hunt… for goats.

Kumbo is known for its livestock market, held a few times a week, and we’ve been directed to pick up three goats for Dr. Kenneth, one of our Cameroonian project managers; he’s getting married at the end of this week, and as tradition requires, his fiancée’s family has insisted he provide three goats (as well as three pigs and other assorted livestock) as a dowry for their traditional marriage. This is interesting to me. Kenneth is a trained pharmacist, regularly attending conferences in Geneva, Mexico City, and the US. In order for his bride’s family to accept him though, he has to provide a goat? This in itself is something that has always struck me as interesting- I can understand why the idea of the dowry still persists among people living in the village, but the fact that it continues among urban, well-educated Cameroonians (and Chadians, and Ugandans, and Sudanese) seems a bit odd. Tradition is far stronger here, I guess.

The day before, for example, I’m sitting on an outdoor terrace with a Peace Corps volunteer I met in the middle of ‘Squares,’ the main intersection in ‘downtown’ Kumbo. As I sip my drink, I suddenly see four or five older men dressed in loincloths and carrying wooden spears, ceremonially making their way down the street. They’re dancing on either side of a figure dressed entirely in black, wearing a costume covering his face with nails protruding all over. He’s ‘surrounded’ by the men in the loincloths with the spears and ropes, and dancing his way down the street, lunging at people at random, and shaking the spear he carried.

“That’s the juju,” one of the Cameroonian men sitting with me explains, referring to the local black magic that’s still very much a part of life here . “They’re guiding him down to the royal palace for a ceremony.”

Nobody seems to find this even the slightest bit unusual, from what I could tell- taxis continue to circulate, women cook omelettes and fried potatoes in cast-iron woks over charcoal on the side of the road, and people chat on cell phones. I guess cultures everywhere like to showcase their traditions though - it’s why the St. Patrick’s Day parade exists, and why we light a menorah in the center of most major American cities at Hanukkah, right? In any case, the juju passes, I finish my drink, and Leslie and I continue to look for goats. 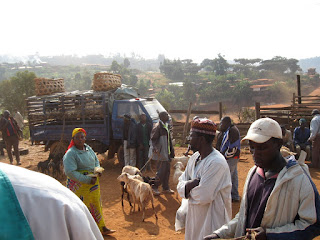 We arrive the next morning at the main livestock market, down a bumpy dirt road and in a fenced-off triangle. Leslie suggests that I should probably wait and follow him a few minutes later- if we’re seen together, the price for the goats we want will skyrocket- the fact of being white in Africa. I wait with Mahmane, our driver, by our truck, and watch. Sheep and pigs are milling around everywhere, and the chorus of maaah-ing and squealing is overwhelming, as is the smell. We don’t see many goats though, until we spot a truck on the edge of the market, where three teenagers are piling them into the back, at least 20 or more, most sitting in large woven-grass baskets. I decide enough time has passed, and I make my way over to Leslie, Mahmane in tow.

“That isn’t good,” Leslie says, gesturing at the truck. “Someone came from Bafoussam (the capital of the Western Province), and is buying all the goats to take back and sell. Now it’s going to be very expensive.” He does manage to arrive at a price with the seller though, 15,000 FCFA (about $33) each for two goats, and Leslie leads the animals to the back of the truck, where Mahmane ties them inside. Leslie goes off to find a third, and Mahmane and I wait.

He’s referring to Tabaski, a Muslim holiday known as Eid-al-Adha in most parts of the world. It’s meant to commemorate Abraham’s sparing of Isaac in the Bible, after which he sacrificed a sheep instead.

“How much are the sheep?” I ask Mahmane, an idea brewing.

One of my favorite parts of living here, and living as an ‘expat’ is the ability it provides to do little things that can mean a lot for people. At the moment I’m earning a stipend, instead of an actual salary; the truth is that it’s a very generous one, and coupled with the additional benefits, it means that I earn substantially more money than the majority of the people I work with in the office. On one hand, I can see why this isn’t particularly fair; on the other, I realize that if Cameroonians working in Cameroon were paid on the same scale as international employees it would wildly distort their lives, and make extended families even more dependent on them than many already are. It means that I probably am taking home more than my boss does every two weeks, despite his 15 additional years of experience in this job. And it certainly means that I’m bringing home more than Mahamane, probably 15-20 times as much as his driver’s salary, I’d guess. This disparity isn’t something I have the ability to change, so rather than attempt to do so, I like to do what I can to provide a bit of help and support when it’s possible.

For the first time I can remember, I hear an adult Muslim man squeal with delight.

“Wow! Thank you so much!” he says, grasping my hand. I smile. 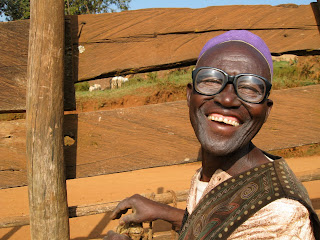 We make our way into the market, where we see a few sheep tied up by the fence. We make our way over to one, white with long horns, and the seller appears. He’s an old man, wearing thick black plastic-rimmed glasses, dressed in a pinkish bubu, and sporting a bright purple cap.

“How now?” he says, greeting us in Pidgin English, the local lingua franca. Mahmane and I smile at him- neither of us are Pidgin speakers, and although normally Mahmane would take the lead, the fact that he’s French-speaking actually means it makes more sense for me to do the talking in this part of the country.

“How much for the sheep?” I ask, speaking as clearly as I can.

“You bring 33,” the man answers. Naturally the price is higher than it would normally be, simply because I’m standing there. I know how the game works though- after the initial offer, you generally offer half or slightly more, and get progressively closer from there.

The man shakes his head and clicks his tongue distastefully. “You bring 29.”

“23,” I shoot back. The man pauses for a second to consider. “You bring,” he says, gesturing with his fingers tucked into his palm. Mahmane reaches into his pocket and pulls out 13,000- I slip an additional 10,000 into his hand.

“Thank you again so much,” Mahmane says to me. 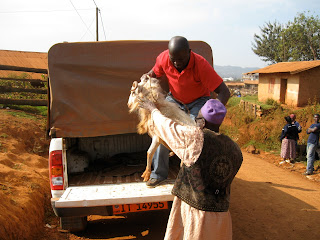 Mahmane and the seller pull the sheep out of the market and to our waiting pickup, where they half-wrestle/half-toss the animal into the bed. The sheep struggles at first, but eventually the two men are able to attach the woven grass rope to one of the metal rods holding up the canopy that covers the truck bed.

“Now that I’ll have a sheep this year,” Mahmane says, “our tradition says that I’ll need to slaughter one every year for the festival. It’s very important.”

I’m a bit concerned- I helped him to buy one this year, but when the next Tabaski rolls around, I almost certainly won’t be in Cameroon any longer- I wouldn’t want to put an obligation on him to buy something he can’t really afford.

“I hope I haven’t caused you a problem for the future,” I say. “I know sheep are expensive.”

“No, not at all- it’s important to have a sheep for the festival, and I’ll save up every year to be sure that I can afford one from now on,” he answers.

“Since you helped me to get it,” he continues, “I want you to join us this year- it’d be my honor.”

36 hours, 500 kilometers, four goats and a sheep later, Leslie, Mahmane and I are back in Yaoundé. The livestock take to the journey surprisingly well, although I imagine the fresh carrots and cabbage we buy along the way in the home village of my boss, called Santa, help a bit.

The name of the village makes me think- I suppose there’s something Santa-esque about my role in this; I’m being the benefactor, providing a gift to make a holiday possible. On one hand, it’s truly a privilege to be in a position where I have the ability to make someone so happy with something that’s so (relatively) small. On the other, there’s the law of unintended consequences… By buying the sheep for Mahmane, I’ve locked him into purchasing livestock every year; he assures me he can afford, but I still wonder. I know I’ve made a difference for him and for his family this year, and I know it’s a positive one. In the future, I know this sheep will have a lasting effect, long after it’s been prayed over and served with carrots, couscous and sweet tea. Next time though, I hope it’s still a good thing…
Posted by Nathaniel at 1:34 AM