Thoughts on the Northwest

Thinking of the mountains, my mind wanders to things I associate with my life in Denver; snow, microbrews, and grad school. Being back in the mountains now, it seems a little incongruous to combine those images with ndole stew of leaves of peanut sauce, fried plantains, shared taxis, and the constant greeting of “you are welcome.” 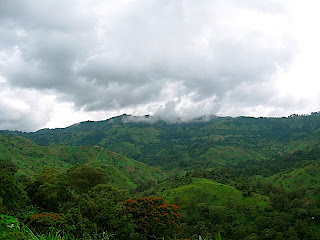 I’m sitting in a hotel in Bamenda, the largest city in the northwestern region of the country. It’s about 400 kilometers from Yaounde, and much higher up in the mountains, at least 1,000 meters. The city itself is surrounded by incredible scenery; sharp green mountains jut up at crazy angles, waterfalls pour off the hillsides, and things I never expected to see in this part of the world, like pine trees, are everywhere. I knew that places like this existed in Africa, of course, but most of my experience in this part of the world has been in scorching-hot, barren, and utterly foreign environments. Differences in the city itself aside, you could drop this territory down anywhere in the Appalachians or the Pacific Northwest, and it might be hard to tell the difference. 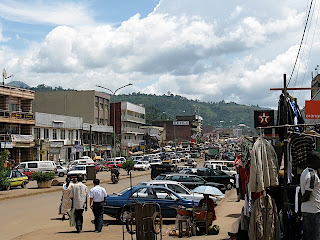 Of course the similarities end once you get to the people and the city, however. Mountain scenery aside, this is definitely still sub-Saharan Africa; the infrastructure is crumbling, goats wander the streets, motorcycle taxis carry four people at a time with enormous suitcases strapped to the back, and people run to approach passing cars constantly, selling plantains, carrots, kola nuts, cookies, and tissues, all balanced on their heads. Fortunately, the government seems to have had the foresight to pave the roads on the most treacherous of the mountain passes, which I’m certain has helped to prevent at least a few of the horrific accidents that happen on Cameroon’s roads on a daily basis.

Northwestern Cameroon borders Nigeria, and is home to the largest portion of the country’s English-speaking (Anglophone) minority. I knew before I came here that it existed, but it’s still bizarre to hear even small children speaking to each other in English, or at least a form of it. ‘Pidgin English’ is the lingua franca here, and it’s fascinating to listen to my colleague Leslie, originally from the area himself, communicate with people in the patois as I attempt to make out what he’s saying. “How be de day, you do go market for buy? OK, small time?” I had no idea that something like that could mean ‘How are you, are you going to the market? OK, goodbye.’

I’ve been traveling through this part of the country with Leslie, and we’re visiting local health centers in the Bamenda area and some of the surrounding communities. We’re visiting these places to get an idea of the needs of the various health centers. The idea is that by meeting the doctors and nurses who run these facilities, we can get a sense of what they lack (which is plenty), and use that information to write proposals targeting donors who might be interested in providing some of the supplies and equipment. 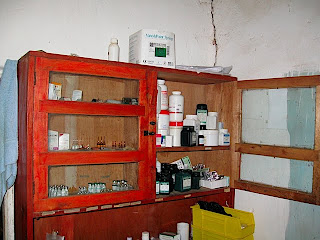 The places truly run the gamut. Yesterday we went to see a small clinic outside of Kumbo, a town much higher in the mountains, more than 2,000 meters (about 6,500 feet for the Americans) up. The clinic had two small rooms, a couple shelves of basic anti-malarial and diarrheal medications, and a few beds with mismatched sheets. The Catholic nurses there try valiantly, but they’re limited by what they have, which isn’t much.

Contrast this with the hospital we visited in the village of Shisong today, just outside of Kumbo. The hospital was built in collaboration with the Catholic church in Italy, and honestly, it’s an amazing facility. Hund 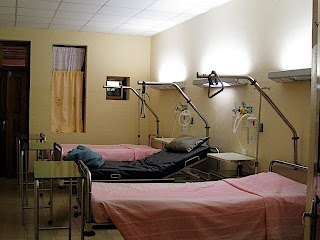 reds of beds (from what I could tell); radiology, ultrasound machines, skilled nursing for people with HIV/AIDS, and a cardiac unit equipped to perform open-heart surgery. The brand-new buildings looked like something you could drop down in the States, and it wouldn’t look much different. And all this in a mountain setting that feels like a living postcard.

What’s amazing to me though, is that this facility is located at the end of a dirt track in a small mountain village, along a rocky path that could wash out at any time during the lengthy rainy season. I think it’s wonderful that this place exists, but if someone is having a heart attack, all the defibrillators in the world won’t save them if the road to the hospital is washed out.

This is part of a larger issue from what I can tell though, and something that strikes me about Cameroon as unique. As opposed to other places I’ve worked, such as Chad, Niger, and Sudan, this place has such incredible potential, and could be so much more than it is. This is not to say that places like Chad don’t have anything going for them, but the degree to which it exists is far more in Cameroon, I think. The mountain scenery, for example; with a functional road, decent network of hotels, and the right amount of promotion, people would come from around the world to visit here, I’d imagine. Its green year-round, the temperature is always pleasant, the air is clean, and the views are truly stunning. If it was done right, this could be a tropical version of Switzerland; instead, it’s a collection of villages and towns stuck in the mud on the way to paradise, figuratively and literally. 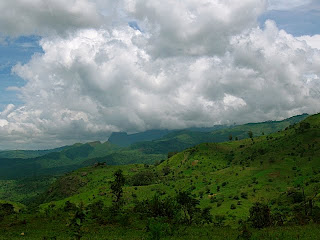 This place could be an economic powerhouse for the country, and could play a major part in catapulting Cameroon not necessarily into the industrialized world, but something much more together than it currently is. Due to short-sightedness, ethnic politics, corruption, and what often feels like a lack of imagination, this doesn’t seem to be happening. This part of the country, as the Anglophone minority region, has always been somewhat marginalized, and has been a stronghold of the political opposition, such as it exists here. Because the Anglophones have generally been opposed to many of the policies coming from the Francophone leadership in Yaoundé, this region has often been starved for funds by the central government, a tactic obvious in the decaying roads in the center of town, the regular power outages, and the lack of opportunity for most of the people here. It’s best not to discuss politics too much as a foreigner here, but looking around, it’s hard not to notice this sort of thing.

One thing Cameroonians are known for, for better or worse, is being ready to take advantage of a possibility where it’s presented. One person’s opportunism is another’s entrepreneurial spirit, I suppose, depending on how it’s approached. Visiting the cardiac center in Shisong today, it’s obvious the potential to do incredible things here exists. Driving the pitted streets of Bamenda and Kumbo, and the lakes of mud separating the two, it’s easy to feel like there’s not much hope. The question, I guess, is which way are things going, and which side will eventually win.

Posted by Nathaniel at 1:30 PM