We go to visit the village of Nadegbe today, about 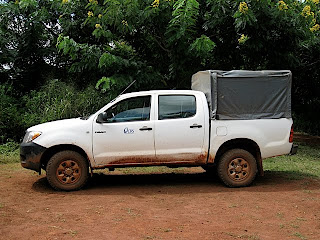 a 15-minute drive outside of Batouri. It’s along a narrow dirt track surrounded by thick bushes on either side- as we drive by people walking along the road duck into the underbrush to allow our Hilux pickup to pass without injuring them. Despite being dirt (there’s no pavement after Bertoua, the capital of the East Region), the road is surprisingly good, and we’re able to cruise along with only the usual jostling.

When we arrive at Nadegbe, a crowd is already gathered. We’ve come to help Nadebe and two other villages- Mama and Pandi- prepare a community development plan, basically a list of priorities of things that they’d like to see built or bought to help them develop the area. These villages will begin earning money from so-called ‘Community Forests,’ a section of the rainforest surrounding the villages which the inhabitants are given unique license to harvest and exploit, selling the wood to companies and collecting the profits, which are then used to buy the things they need. It’s a smart idea, and one that the Cameroonian government has been managing for the past 15 years- few communities are aware of it, however, and part of our work here is to spread the knowledge of this opportunity, and hopefully improve people’s lives by providing basic services.

The chief of Nadegbe greets us under a tin-roofed shelter, where a few padded chairs and a couch have already been set up. As the guests, we’re entitled to the seats of honor, necessary or not. The chief is wearing a shapeless olive felt hat and a white tunic with long purple stripes running down the side. He greets us formally, we introduce ourselves, and we get started with the plan. 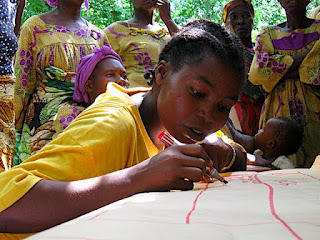 The village is divided up into three groups: men, women, and young adults, each of which gets a marker and a sheet of butcher paper. We’ve asked them to prepare a list of what they think are the most important needs for their communities, in the order they’d like to see them built or bought. The women gather around a small classroom desk someone has brought; many of them are carrying babies on their back or toddlers lurching around at their ankles. They discuss amongst themselves, at times shouting at each other, but generally seeming to come up with some sort of agreement. The list begins to take shape; schools, followed by a well or a water pump, and a corn mill. The young adults have set up camp on the hood of our pickup, spreading the paper across- they’re also talking, coming up with a similar list, except this one also includes a generator and soccer uniforms. Interesting to see the priorities…

When each of the groups have finished, they assemble as one, and we start going through the lists. Certain things, like schools and water sources are unanimous, and come to the top of the priority list. Other items, like the soccer uniforms, get pushed to the side, something that might happen someday, but it won’t be a priority.

The needs seem so basic, and it’s interesting to listen to the discussion. Cameroon is a far more developed country than most of its neighbors, but judging by this village, and the others nearby, you’d never know it. It seems odd that this is the same country where I see Cameroonians exercising on Precor elliptical trainers at the Hilton and using fiber-optic internet at their houses, while just a few hours down the road, people are struggling to get things as simple as clean water and a school that isn’t made of wooden poles and grass. I know that these people live a rarefied life in the capital, but still this disparity seems more pronounced than anywhere else I’ve worked so far. In Chad and Niger, by comparison, villages were still desperately poor for the most part, but even N’Djamena and Niamey weren’t all that much better off; they were certainly nowhere near as developed as Yaoundé, with things like overpasses, functional traffic lights, and a few genuine skyscrapers.

It feels ridiculous that things are this 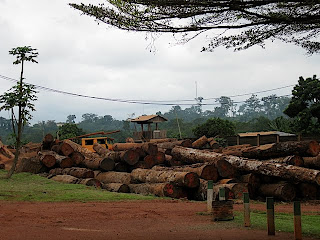 undeveloped in this part of the country, considering what’s available. Eastern Cameroon is one of the largest rainforest zones in the world, and the logs coming out of here to make floorboards and armoires for people in Europe and Asia sell for tens of the thousands of dollars each, in many cases. Considering this, why aren’t people better off? Unfortunately it’s the same answer that it always seems to be in this part of the world- corruption and greed. When most of the profit from the logging operations is skimmed off to buy larger villas and another Mercedes, the people from the source areas get ignored, unsurprisingly. And when even a small portion of the profit finally does get directed to the community, to do something like grade the road or install a few power lines, the people are so grateful that they aren’t likely to remember just how much they’re being taken advantage of. Without a change in the nature of society here, I’m not sure how things are likely to get much better; I hope the work we’re doing is a start though, at least to the people of Nadegbe.
Posted by Nathaniel at 1:03 PM